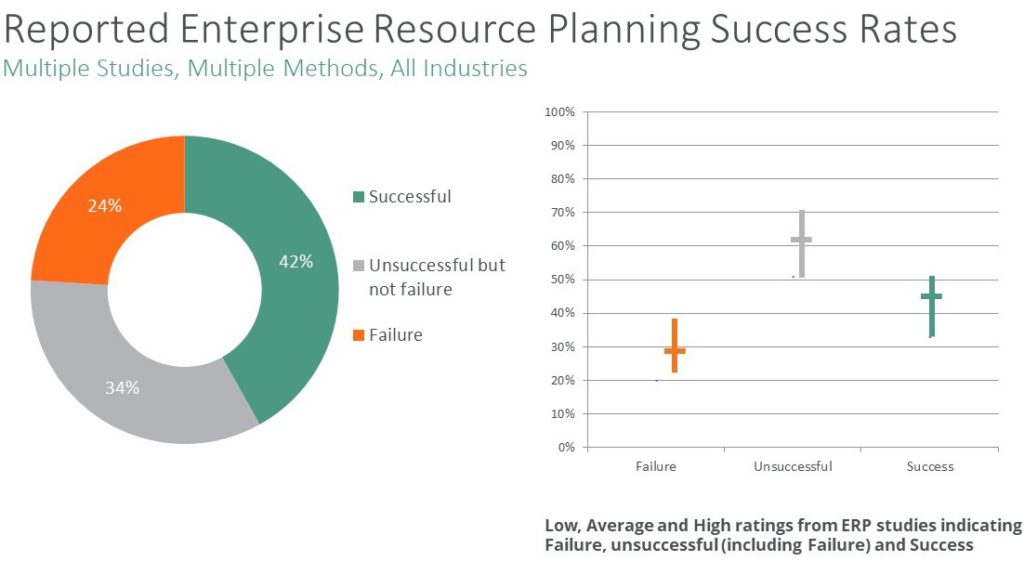 In Canada, the use of ERP for payroll modernization (Phoenix Pay System) resulted in more than 1/4 of public servants having pay errors and some have gone months without receiving salaries as the system has “repeatedly gone haywire” as the New York Times reported. The total cost to overcome the ERP problems may cost as much as C$2.6 billion.

The Government of Australia is investigating high ERP costs and the practices of the leading vendors. Over half the budget recent upgrade to a new version of ERP in Australia (GovERP) was quickly consumed by consultants because a “lack of expertise“.

A large ERP shared services project in France was estimated to be $200 million over budget by the audit office and more than one year late(1) and resulted in late payments of more than $2.2 billion to defense contractors(2).

The German government tried to deflect responsibility for a 55-billion euro accounting blunder that has exposed it to charges of ridicule for being inept and hypocritical after its steady criticism of Greek bookkeeping practices(3).

The National Audit Office in the United Kingdom found the use of ERP shared services added expenses rather than reducing costs(4).

And a Cabinet Office analysis found:

Another analysis from the Cabinet Office  in the UK found inconsistent software license pricing in government for the same Tier 1 ERP package where the two leading vendors had “the most inconsistent prices for ERP licence and maintenance support across central government departments.” 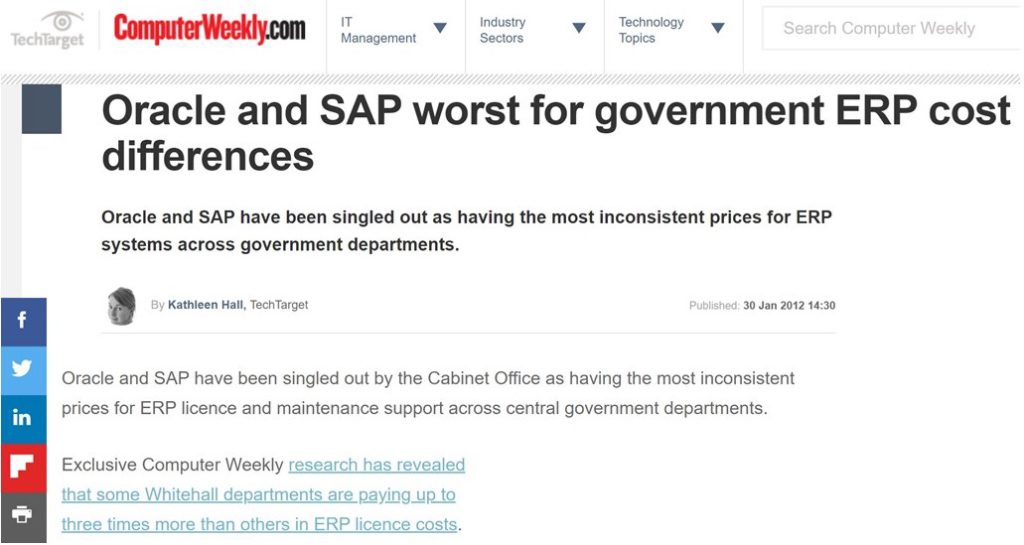 Another UK study found low satisfaction with ERP in government where over half of the respondents were using Tier 1 ERP software. The survey showed Tier 1 ERP satisfaction is far lower than alternative solutions.

A report from 2017 from the DoD IG found that “the Navy and Defense Finance and Accounting Service spent $2.5 billion over the last decade and plan to spend an additional $823.4 million over the next 5 years on maintaining and developing new functionality for Navy financial management systems that are not compliant with the standards that might not support auditable financial statements and not meet the congressional mandate to have auditable financial statements.”

Our own study of ERP contracts with the US Department of Defense (DOD) show that projects with the world’s two largest ERP vendors run over budget most of the time. 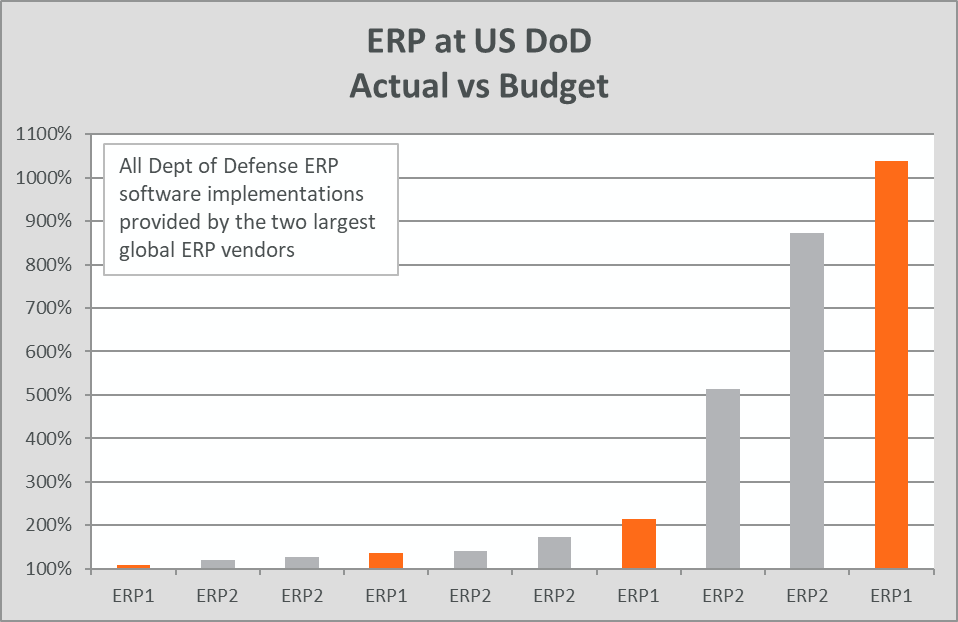 Panorama Consulting research shows 78% of public sector ERP implementations are over budget and over schedule and 35% simply fail!

In reviews of top ERP failures journalist Chris Kanaracus found that slightly over half came from the public sector despite representing only 20% of the market size. The majority of IT disasters involved ERP implementations.

While it is common ground that an FMIS is critical to PFM reform in developing markets, there are ongoing issues with these large scale IT projects. A recent survey of 46 countries by the IMF showed that many face severe challenges in transforming their FMIS into an effective tool of fiscal governance. These challenges relate to: 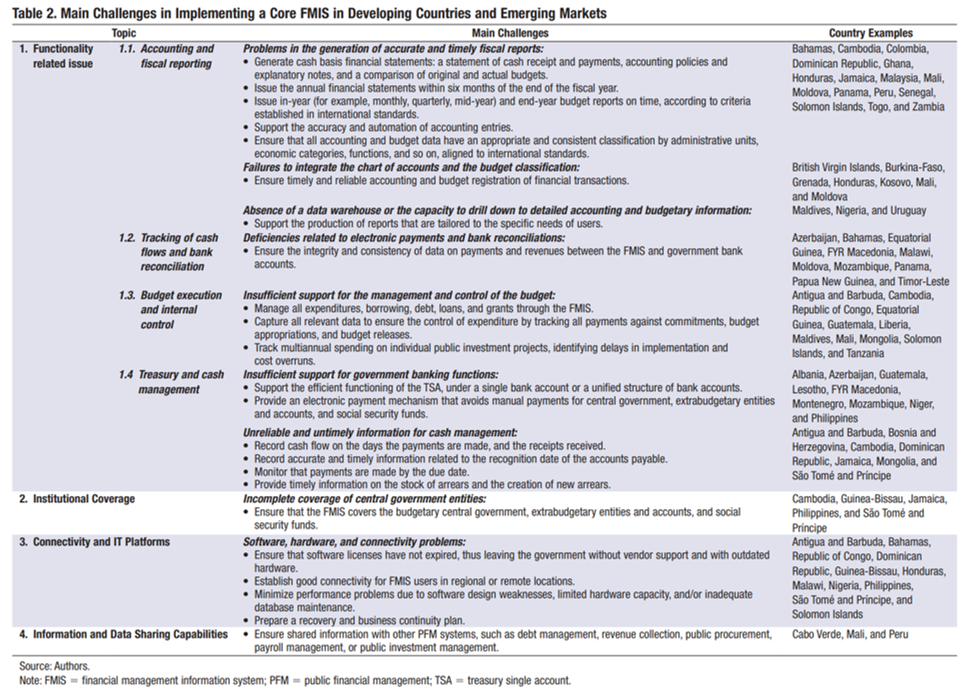 6. Large IT Projects are Risky 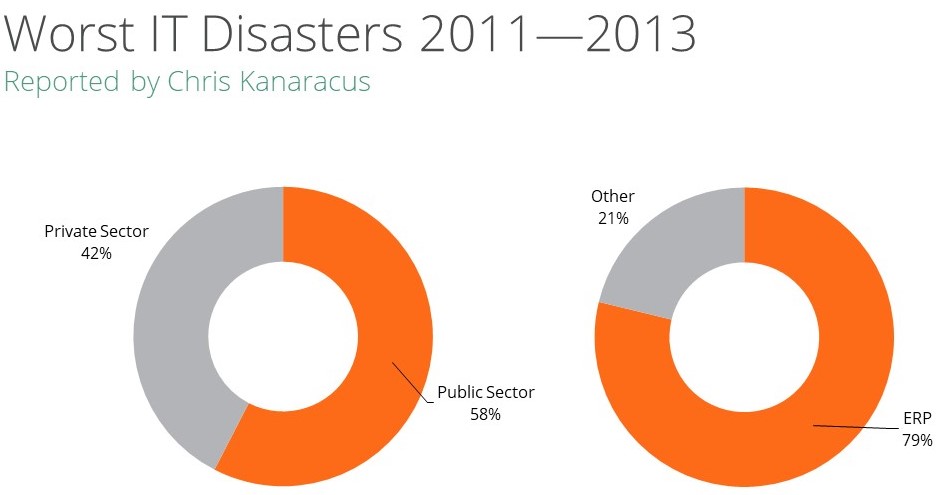 The implementation of GRP systems in government can be more challenging than typical IT projects. GRP projects combine general IT risks with ERP and reform transformation. 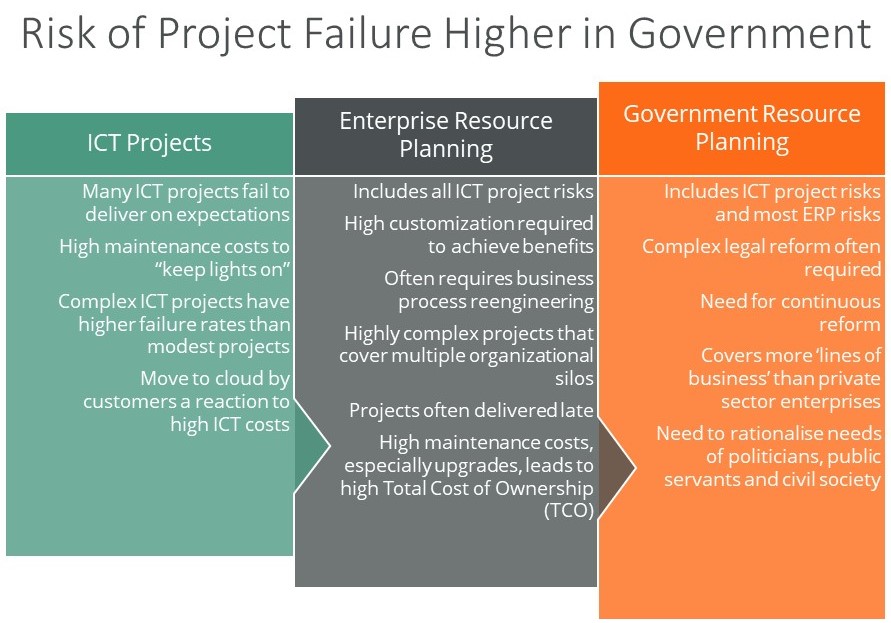 7. Evidence of Large IT Project Problems in Government 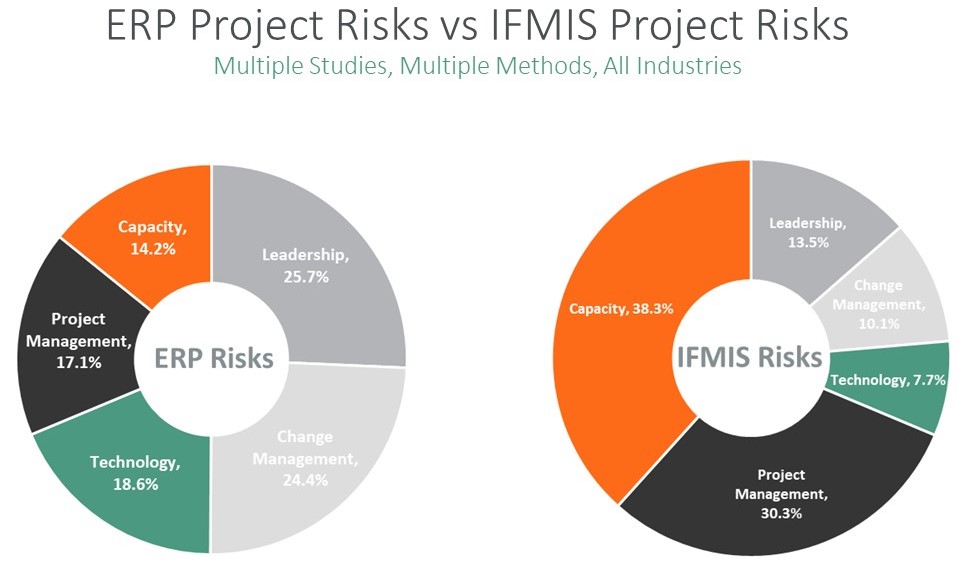 While there are some reports of improved satisfaction levels with ERP implementations, this CIO feature shows that there still are noteworthy issues in the industry:

An analysis by Price Waterhouse Coopers found no ERP project that achieved all success criteria. 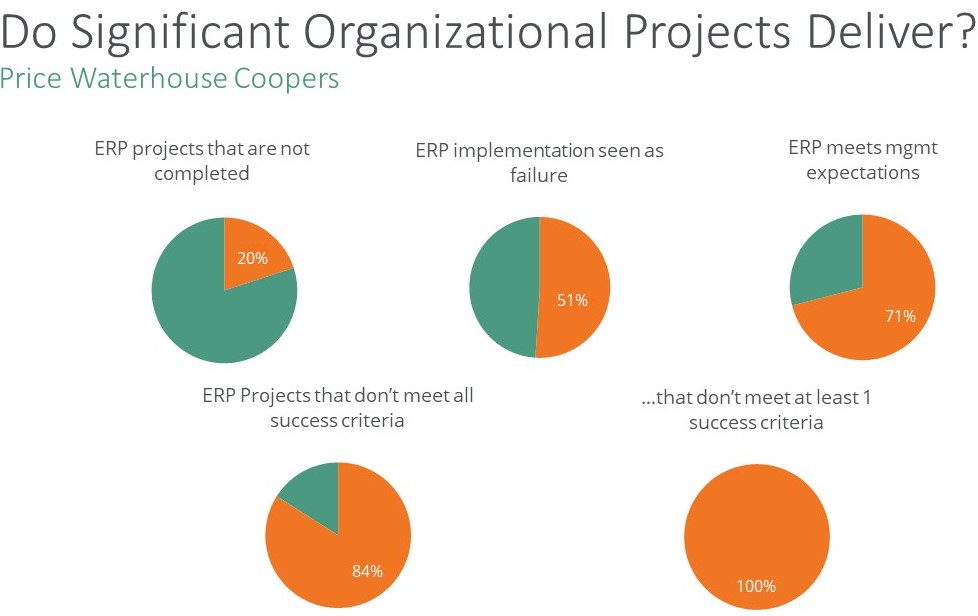 A survey from Oakton Applications found “most organisations have dug themselves an ERP hole with overstretched teams, complex customizations and a backlog of expensive upgrades.” The survey also found that “customization is strongly driven by ‘improving business processes’ or ‘unique industry requirements’ for more than 80% of organizations.” This points to the fallacy that general purpose ERP packages can effectively support multiple industries. 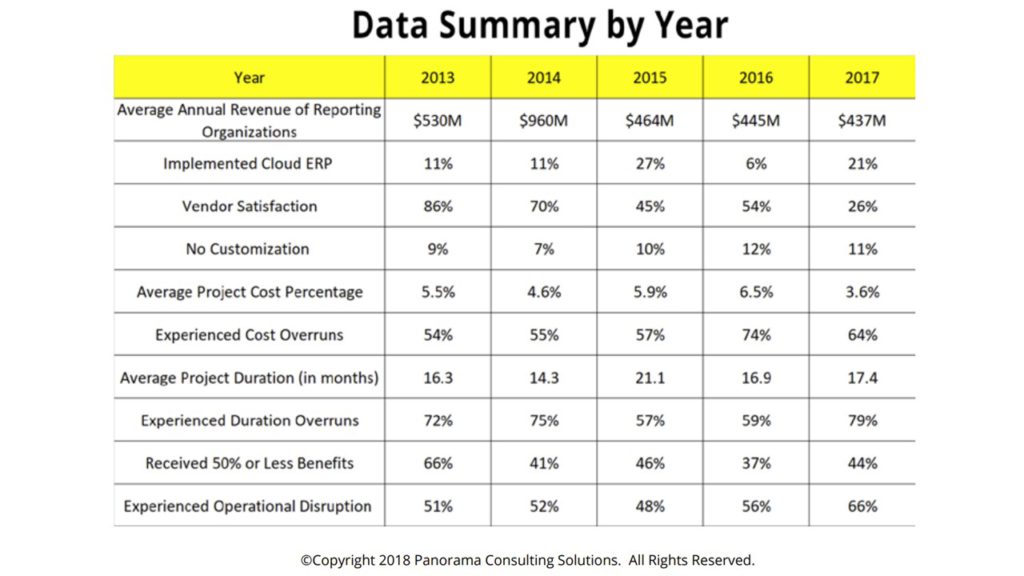 9. Analysis of GRP vs. ERP 5 Year Total Cost of Ownership

FreeBalance competes internationally against major ERP providers. Price quotations are often made public during bid openings in many countries. Most of the international requirements call for all costs over a three or five year period including software licenses, implementation, support, training, middle-ware and hardware. Our analysis shows that: 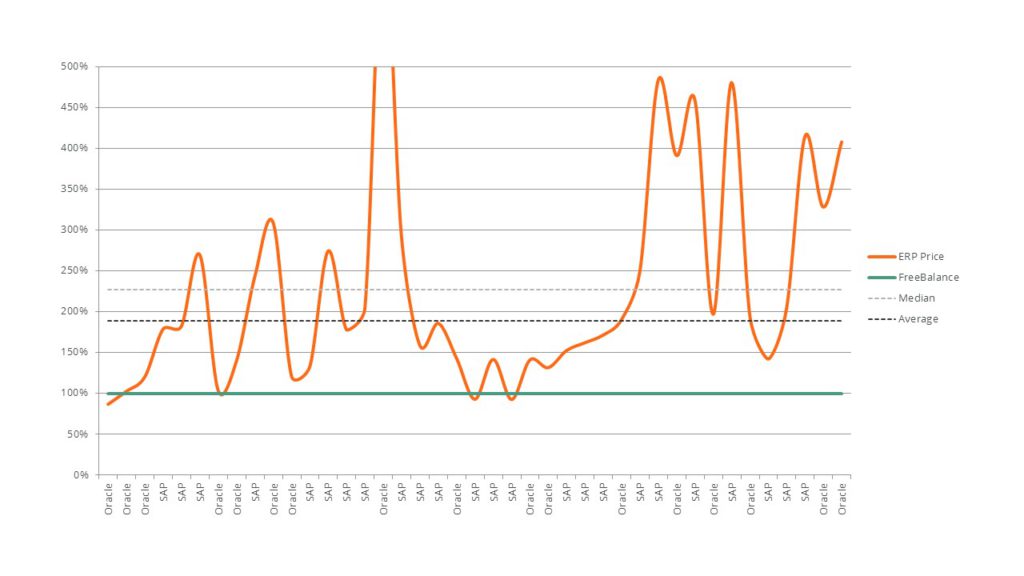