Posted on March 6, 2017 in National Happiness

As we prepare for the FreeBalance International Steering Committee (FISC) conference in Miami next week, I am reminded that not everyone believes that governments should use happiness and well-being as policy objectives. We will be exploring how public policy and budgeting priorities can adapt to national happiness at FISC. Much of the criticism of “gross national happiness” as public policy seems to be emotional in nature using social science to justify these views. There is significant resistance to changing the focus of policy from economics and growth the well-being and happiness. “The problem is not merely that this lobby wants to replace GDP with a happiness index. It is the belief that, by measuring happiness, it then becomes subject to prediction and control by policymakers. (Ormerod, 2012)”

Is the Science of Happiness Pseudo-Science?

Critics suggest “unbiased observer who encounters happiness studies for the first time cannot help being struck by how crude and unsophisticated they actually are. (De Vos, 2012)” Some go far to suggest that “most research on people’s perceptions of their own well-being has asked about the influence of individual characteristics, paying very little attention to social and political conditions that might make life more or less enjoyable. (Flavin and Radcliff, 2014)”
Yet, the science of happiness appears robust (Layard, 2011), with a depth of scholarship. This is a social science based on economics. It is possible to claim that theories cannot be proved and definitions are vague (De Vos, 2012) or lack objectivity (Bales, 2016) in most social sciences.

The science of happiness is predicated on the notion that well-being and life satisfaction are culturally determined. This cultural aspect is seen as the weak point by many critics because “the most robust determinants of happiness – trust and religiosity – are not affected by government policy (Bjørnskov, 2012)”  “There are simply too many personal, familial, genetic, cultural, and societal factors, and too many idiosyncrasies that will forever remain beyond the grasp of public policy and public servants, no matter how enlightened and determined they may be. (De Vos, 2012)”
One logic from the critics is that increased government spending ought to improve happiness if the science of happiness is valid.  One study found “no basis for the claim that government spending is positively associated with happiness. High government spending instead tends to reduce growth and may also be harmful to other factors contributing to happiness. (Bjørnskov, 2012)” Of course, the notion of happiness as public policy does not prescribe additional government spending. And, critics seem to find it easy to claim that governments can create unhappiness, but not happiness.

What about Gross Domestic Product as a better Policy Objective?

Many observers believe that most governments seek to improve economic growth using GDP as measure. This is somewhat of a fallacy because government policies tend to have a broader focus. Economists might focus on GDP “but it cannot capture everything that is important to people. This is because some of the factors that determine our quality of life cannot be measured in terms of monetary value. (Kinderman, 2015)”
It is true that GDP is measurable. Some critics take this notion further: “economic growth is thus the common underlying facilitator of all the major happiness factors that reasonably fall within the ambit of government policy. The happiness mantra that prioritizes happiness over growth fails on its own terms. (De Vos, 2012)” Yet, the science of happiness includes notions of economic growth. 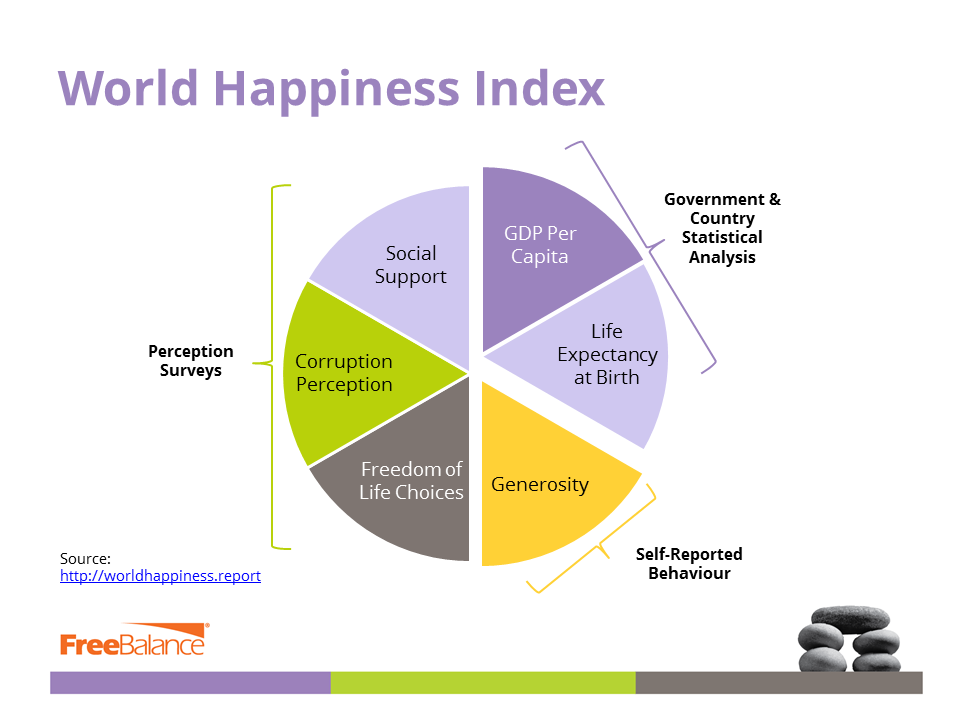 Is the notion of wellbeing in government policy a “deeply flawed moral presumptions, appearing to implicitly accept a thoroughly hedonistic understanding of happiness. (De Vos, 2012)” Could wellbeing act as a justification for elitism where “experts know better what is good for people (Ormerod, 2012)”?
Critics go further to conclude that the “pursuit of happiness by policy boils down to having zealous politicians regulate the rest of us into their versions of happiness, based upon some idealistic researcher’s understanding of what happiness means and some benign technocrat’s interpretation of it. (De Vos, 2012)” Context is important here. Like many measurement, GDP does not encapsulate all that ought to be considered in policy. These other measurements include the Human Development Index, the Legatum Prosperity Index, and the World Governance Indicators. Happiness measurements that include citizen perceptions could be more relevant than traditional measurements.  “Whereas most policy making is based on officials assuming they know what’s best for people, this new well-being data gives people across society a voice – so it is in fact highly democratic (Layard et al, 2012)” 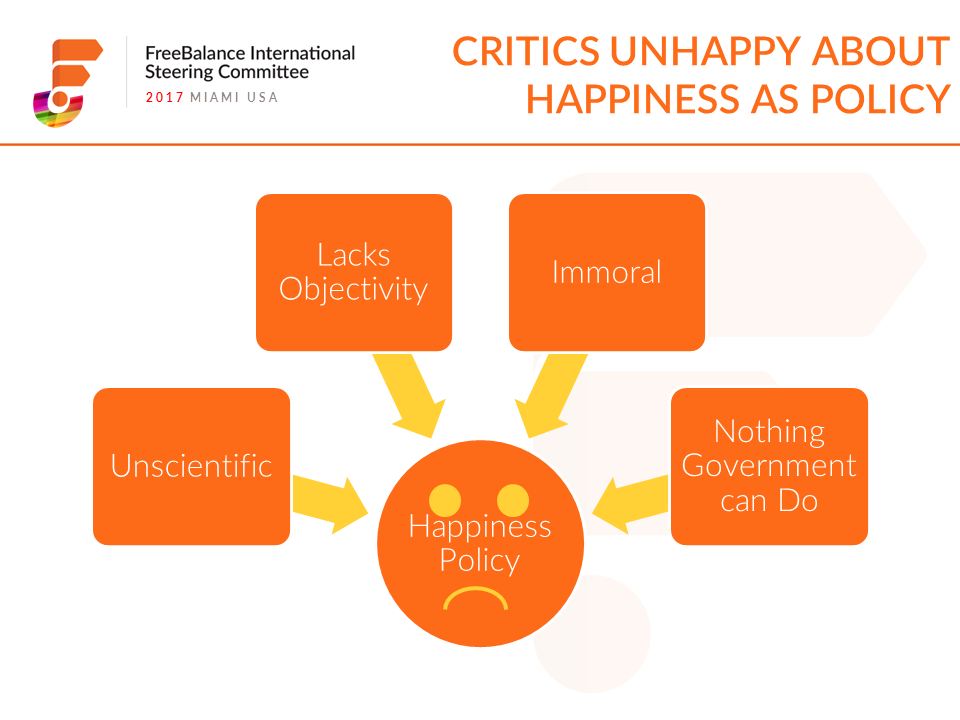