Posted on February 9, 2017 in Smart Government

My previous blog entry, Do Smart Cities Improve Citizen Well-Being? explored the holistic public policy implications of smart cities. My conclusion was that “policy makers have the opportunity to upturn the model of smart city technology acquisition from technology to well-being. It is true that monitoring well-being is challenging, as it is with any measurement of government performance.”
My other conclusion was that cities become “smart” through smart governance. Cities do not become smart because of the application of so-called “smart” technologies. The danger is that the technology innovation onslaught could prevent cities from achieving any measurable improvement in citizen well-being. New technology innovation could disrupt traditional democratic concepts.

How can cities become smart in the emerging robotics and “future of work” age?

The “Fourth Industrial Revolution” or “Industry 4.0” of robotics, 3D printing, big data and artificial intelligence is creating new economic environments and business models. These new technologies are changing the “Future of Work”, and the future of government. The “sharing economy” and the “gig economy” provide opportunities and threats to cities and city governments. “The growth of the sharing economy is likely to increase the amount of uncounted economic activity in the economy (WEF 2017)”
The fundamental threat is that city revenue will deteriorate because of the tax implications of new modes of business. “The sharing economy is making it so that the employer/platform owners have no obligation to provide the benefits, safety and longevity that traditional employment once did. (Bollier 2016)”
“One of the challenges related to smart cities is the imminent disruption of the labor market, due to progressing automation and use of robotics to replace manual work.  (Deloitte 2015)” This has the potential for job losses in cities.. “Rapid progress of artificial intelligence and machine technologies will replace, majority of manual and repeatable jobs. Only a small percentage (less than 5%) in knowledge based and human dependent jobs, may survive. (Raghunathan 2016)”
City social services may need to ramp up because of job losses, in the context of declining revenue. “If cities can no longer sustain jobs, how is it going to support an additional 100% migration from rural areas in the coming years? Where are the new jobs going to be created to support another 2.5 billion people (discounting the heavy job losses within the existing 3.5 billion city dwellers)? (Raghunathan 2016)” 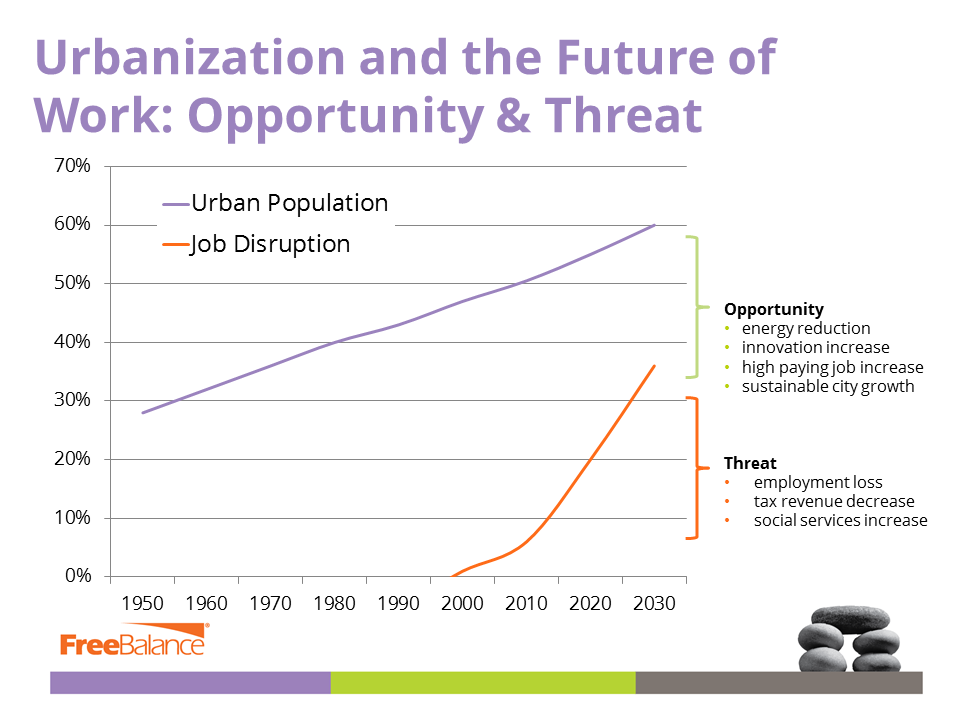 Most observers agree that automation will result in changes to the nature of employment, but not necessarily an overall loss of jobs. “For example, the idea that automation takes jobs away is slowly evolving. Several studies now indicate that automation tends to open up new revenue streams that create newer jobs. (Sharalaya 2016)” Many studies indicate that there will be some disruption in job markets. “While automation will eliminate very few occupations entirely in the next decade, it will affect portions of almost all jobs to a greater or lesser degree, depending on the type of work they entail. Automation, now going beyond routine manufacturing activities, has the potential, as least with regard to its technical feasibility, to transform sectors such as healthcare and finance, which involve a substantial share of knowledge work. (Chui, Manyika, Miremadi 2016)
Smart cities technology operates in the context of digital ecosystems. Much of the policy implications of digital technology for cities comes from consumer and public sector utilization. This includes the disruption of labour markets with the resulting impact on citizen well-being. Smart city policy-makers need to run scenarios to enable leverages the well-being benefits and mitigating the disadvantages from digital technology adoption.

Technology has the promise of achieving elements of direct democracy by scaling transparency, participatory budgeting, and citizen collaboration. The potential dark side for ubiquitous technology is the loss of privacy through improved public security and surveillance. “As citizens stumble into a future where they will be walking around a city dense with sensors, cameras and drones tracking their every movement – even whether they are smiling (as has already been tested at the Cheltenham Jazz Festival) or feeling gloomy – there is a ticking time-bomb of arguments about surveillance and privacy that will dwarf any previous conversations about Facebook or even, perhaps, government intelligence agencies scanning our email. (Poole 2014)”
The approach to public security and surveillance in the pursuit of efficiency and effectiveness has equity implications. “When governments decide on smart city projects, they necessarily choose whom those efforts will benefit – and whom they will neglect. Even when it’s unintentional – which it often is – the results are the same: Not all areas of a smart city will be exactly equally “smart.” Some neighborhoods will have a greater density of air-quality sensors or traffic cameras, for example. (Smith, 2016)” 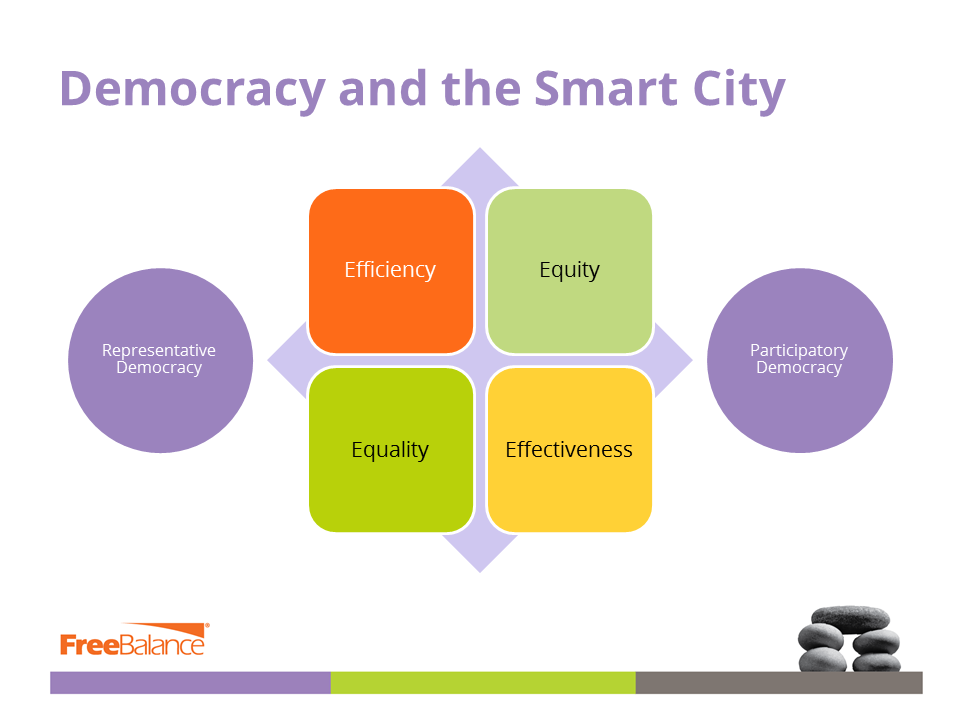 The ramifications of government data collection introduces the question of “what role will the citizen play? That of unpaid data-clerk, voluntarily contributing information to an urban database that is monetised by private companies? (Poole 2014)”
Privacy and security play roles in perceptions of well-being. Citizens may feel a greater sense of well-being because of improved public security. On the other hand, the reduction of privacy and concerns about surveillance could increase anxiety. Policy-makers need to track citizen perceptions with every smart city initiative.
This monitoring of well-being perception needs to extend to the deployment of open data. “Part of the process of coordination and integration using state of the art data systems and distributed computing must involve ways in which the citizenry is able to participate and to blend their personal knowledge with that of experts who are developing these technologies. Privacy concerns as well as security are key to this challenge. (Batty, Axhausen, Giannotti 2012)” 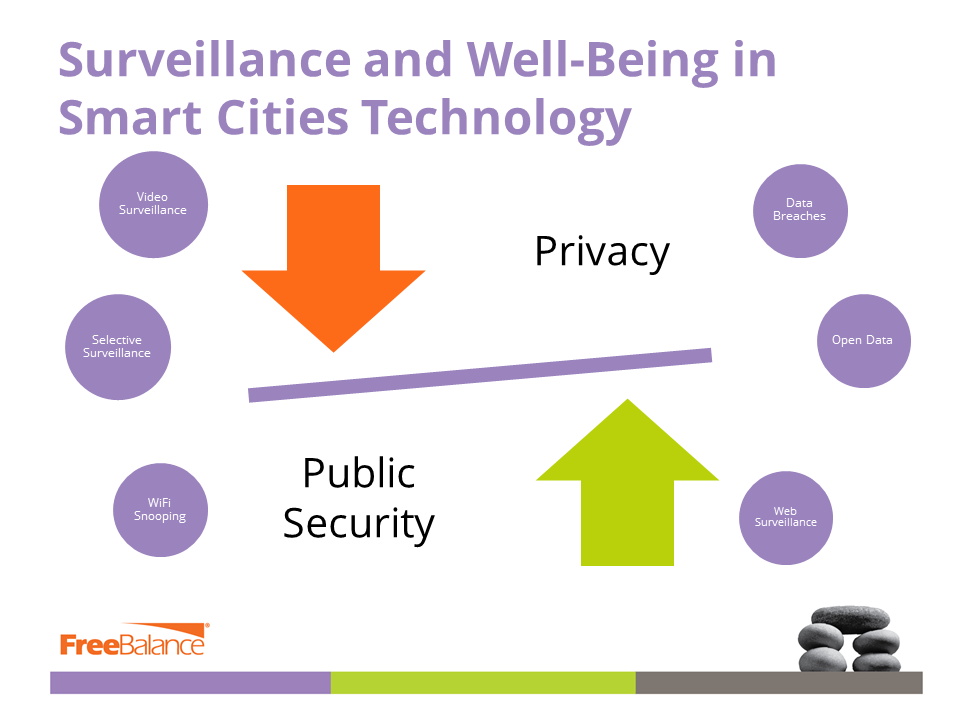 Some observers believe that technology enables equity while others believe that new technologies threaten to extend the digital divide. There is the possibility that technology will further exacerbate inequality creating a persistent underclass. “The unintended social consequences of smart city projects are a real concern, and a technological imbalance is at the heart of it. (Edell 2016)”
More affluent citizens, with political connections,  could drive smart city initiatives at the disadvantage of others. “Rising income inequality, societal polarization, continued environmental devastation and mounting economic risks have been eating into living standards and may make life for future generations in many countries more difficult.  (Drzeniek-Hanouz and Marti 2017).”
Pro-poor policies can reduce unrest and conflict. The judicious use of technologies means that cities can achieve improved well-being for less-advantaged citizens at low costs and high efficiency. It is becoming clear that “the benefits of Future Cities should not be limited to the most affluent members of society and should also improve the lives of the urban poor living in sub-standard conditions. It is outcomes such as improved transportation, sewage handling, and access to drinking water and sanitation, among many others, that will ultimately determine the success of Future City initiatives. (Rajan,  Black, Chinta, Clark 2016)” 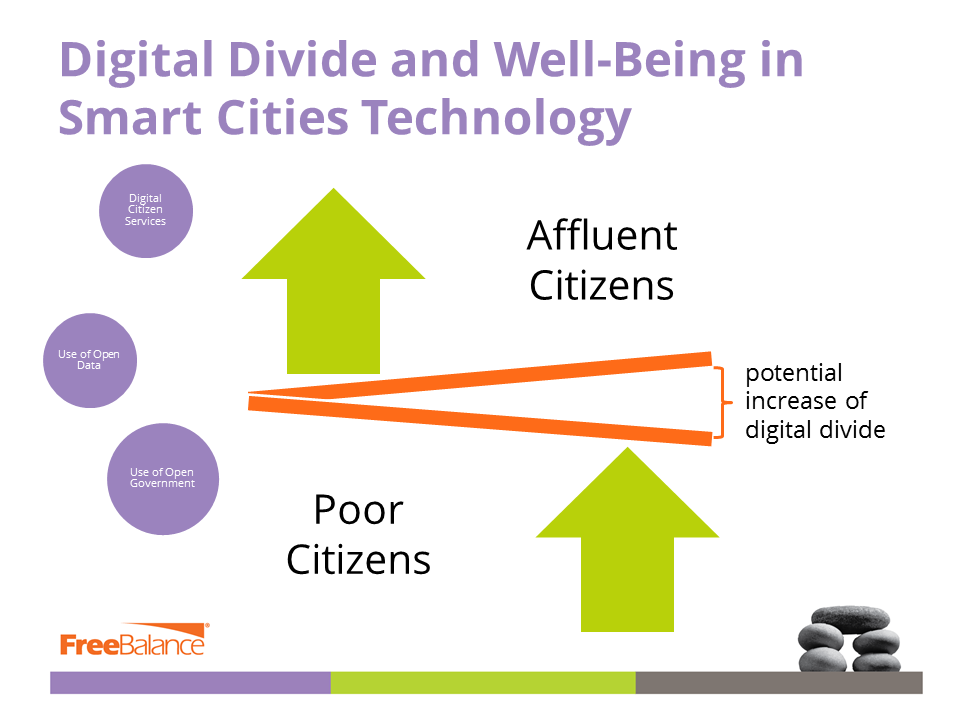 Smart cities combine technology with regulatory reform. “Efficiency must be balanced with equity. New technologies have a tendency to polarise and divide at many levels and we need to explore how new forms of regulation at the level of urban and transport planning, and economic and community development can be improved using future and emerging technologies. The smart city of course offers the prospect of ending the digital divide but it will also open up different divides and our challenge is to anticipate and plan for these. (Batty, Axhausen, Giannotti 2012)”
Policy-makers can combine regulatory changes with technology initiatives to improve well-being among the most vulnerable citizens. City-wide WiFi, internet kiosks, free technology and coding classes, and the support for mobile devices can reduce the digital divide and inequality in cities.